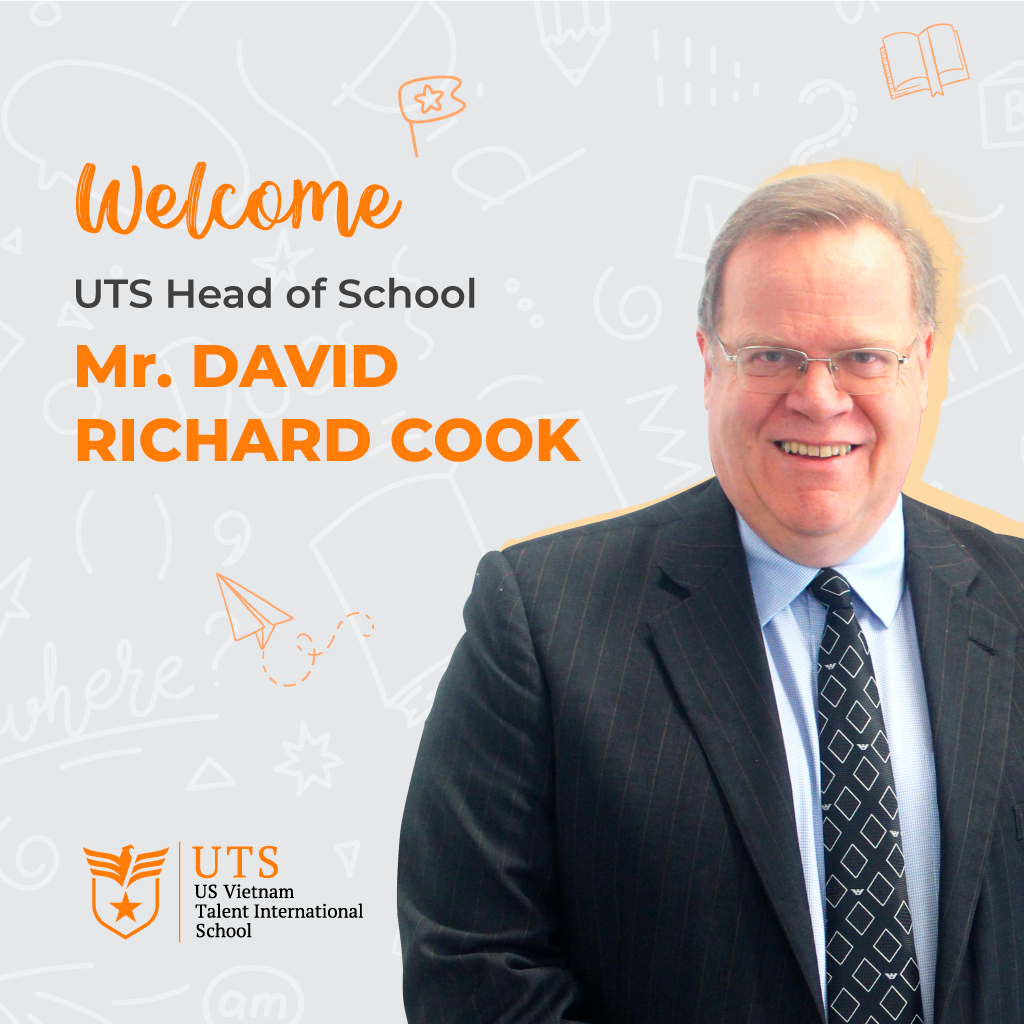 US Vietnam Talent International school is delighted to announce Mr. David Richard Cook to join UTS Board of Director as the new Head of School starting from 4th October 2021.

UTS strongly believes that his contribution will bring remarkable milestones in the upcoming journey. Mr. David has many years of experience in Education along with many considerable achievements during his Headmastership in various schools worldwide. And most importantly, he shares the similarity in vision and passion for the education that he consistently shown throughout all his sharing and direction.

Mr. David has been a teacher all of his adult life. For him it is a profession and he has taught in all of his schools. A historian by education, he studied at King’s College, London and Lincoln College, Oxford, and went on to teach at probably the UK’s top academic school, Westminster, before embarking upon a career in headship, which has lasted for well over twenty years and has covered the globe, from Colombia in the west, via England and UAE, to China and Thailand in the east.

In that time, he has become well-known in the educational world for starting a series of highly prestigious and successful international schools. Among these achievements are Repton School in Dubai where he built a reputation and grew the school within three years to two thousand students. And, more recently Wellington College in both Tianjin and Shanghai, where he was able to open, build and grow both schools from ground up. By the time he left, both schools quickly increased in admissions and gained a reputation for excellence in a highly competitive market. And more recently was Harrow International School in Shanghai, although the school is remoted from the city center, the students there achieved excellent IGCSE results and a year later, A level grades, and got some students into top universities of the world like Cambridge.

David is married to Debbie and she has worked alongside him at many of his overseas schools. They have six children, all of whom have been educated at their father’s schools. The two eldest went to Oxford University and have now embarked upon careers in journalism and acting. The middle two are at university, one at Durham and the other at music college, while the two youngest are still at school, studying for their IB Diploma Program and IGCSEs respectively.

With the contribution of Mr. David and the unlimited efforts of the UTS team, the upcoming journey is worth looking forward to. And in that journey of “growing talent with care”, the companionship of parents is what we truly appreciate. UTS believes that strong connection is the foundation to provide our students a meaningful and memorable learning experience.

UTS and Mr. David look forward to welcoming students back to school in the near future. We wish all parents and students good health and safety.

Online sharing: Have parents told your child about sexuality education?

UTS is missing you!

“WE CONNECT” SUMMER PROGRAM: ENJOY A SAFE AND MEANINGFUL SUMMER WITH UTS

“I feel sastified when trusting UTS to grow my daughter”

Online talkshow: “Create a summer schedule for your child”